Are eventual NBA champs ever routed in Finals? 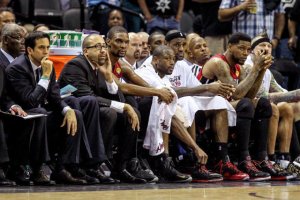 A great friend and loyal Heat fan texted me the following after the Spurs crushed the Heat [PG version]:

That last line hit me in my David Allen / GTD / 43Folders.com soul.  So while I share the dismay–23 minutes after I had been assuring all in range that we were going to make it a game in the 4th–I’m keeping my mouth shut and doom in check given my abysmal track record of predictions about teams I’m rooting for or against.

So once again I turn to the NBA Basketball-Reference web site for a sliver of hope.  Considering a rout a loss by 20 or more; How often are eventual NBA champions routed in the same Finals?  Gulp, not often.

As would be expected, all the teams which suffered routs experienced them on the road.  You have to back to 1984 & 1985 for a series in which the eventual champion was down in the series after the rout, as Miami is now.

Bizarrely, Pat Riley was involved on both sides of the rout scenarios in 4 out of the 7 years between 1982 and 1988.

Examples of NBA champions who were routed in the same Finals:

Close but no cigars:

1 Response to Are eventual NBA champs ever routed in Finals?