Posted on December 9, 2008 by Jorge Costales 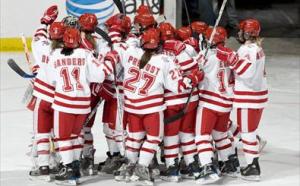 The University of Wisconsin [UW] Women’s Hockey team is undefeated and the undisputed #1 team in the land according to the latest USA Today poll. What better way to get a head start on the 2010 Vancouver Winter Olympics–or the upcoming NCAA Championships, the Frozen Four–than checking out one of their games on cable. I can tell you right now who the USA’s goalie will be, Jessie Vetter. A truly dominating athlete who recently recorded her 31st career shutout, an NCAA record. She is expected to lead the lady Badgers to their 3rd national championship in four years come next March.

That’s her in the photo on the right, in a defensive posture that only Catholic parents of teenage girls can truly appreciate.

I came to learn of the Lady Badgers after an impassioned defense of their cause was made by a not so recent UW graduate and now a Miami-based attorney, who in the middle of a Florida college football email smackdown–consisting mostly of white men from very narrow socio-economic backgrounds–proceeded to unabashedly sing their praises.

The introduction of any type of Women’s sport–other than beach volleyball for reasons too obvious to note here–into a general sports discussion is so unusual that it silenced the discussion. People just couldn’t figure out what his angle was.

With a strong wireless signal strength and a serious late afternoon lack of work ethic, I set out to find out if he was correct or just blowing cheese. I learned the above and found something else almost as interesting about UW. Did you know that UW dominated collegiate boxing during the 1940’s & 1950’s–earning 8 NCAA championships during that period. In a logic which would make Malcolm Gladwell smile, it appears to have been partially based on the fact that Madison was a boxing crazed community which the NCAA rewarded by having it host the NCAA Championships on numerous occasions. A classic ‘outlier’ – talent and good fortune contributing to success. See Christopher Hart’s paper which tells the story nicely.

To get up-to-the-minute ticketing, fundraising and promotional information about the Wisconsin Badgers, join BUCKYMAIL!