Entering game 6 of the NBA Finals, I recap, in honor of Seinfeld and Sgt. Friday, some bizarro facts, ma’am:

How things ended for the 1988 Los Angeles Lakers.

Below, see a re-post from July 2010. How Pat and Dwyane plotted the current Heat dynasty, aka The Meeting That Made The Decision Possible

DISSOLVE TO: A garden, somewhere outside Schenectady:

PAT O’RILEY:
So … Reinsdorf will move against you first. He’ll set up a meeting with someone that you absolutely trust … guaranteeing your ability to speak freely. And at that meeting, you’ll be setup over this whole tampering business [Pat drinks from a glass of wine as Dwyane watches him]. I like to drink wine more than I used to, anyways not as much as that Barkley fellow, but I’m drinking more…. 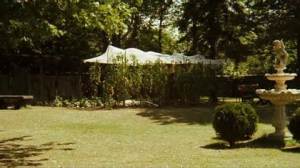 DWYANE
It’s good for you, Pat.

PAT O’RILEY
Oh well, eh … I want you to arrange to have someone check all the tweets that go in and out of your account ’cause the NSA ain’t got squat on Stern….

DWYANE
I did it already, Pat.

PAT O’RILEY (as he stands)
I knew that James was going to have to go through all this. And Bosh, well, [he sits besides Dwyane], Bosh is Bosh…. But I never, … I never wanted this … sharing the spotlight for you. I work my whole post-LA & NY life, I don’t apologize, to take care of the Arison’s. And I’ve refused … to be a fool [Beasley pick aside] … dancing on the string, held by all those — capologists. I don’t apologize … that’s my life … but I thought that … that when it was your time … that … that you would be the one to hold the strings. Mutiple-MVP’s Wade, first owner-player Wade, or … something …

DWYANE
A Lebron succeeding in Cleveland …

PAT O’RILEY
Uh… Now listen, whoever comes to you with this Reinsdorf meeting … he’s the traitor. Don’t forget that.