Highly questionable or in the tank? 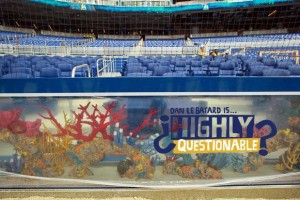 Dan Le Batard’s recent column makes various assertions about the finances of the Miami Marlins which echoes what Jeffrey Loria would have us believe. I don’t know when Le Batard would ever reach the point of skepticism about his Marlins sources, but his patience is impressive. While he is critical of Marlins management on non-financial issues, what he accepts as fact about their finances just doesn’t add up. He wrote:

The team overspent assuming we’d fill the ballpark [#1], which we didn’t, and that meant losing about $40 million [#2] in that calamity of a season…. Unlike Micky Arison, who lost money every year he owned the Heat except last year, Jeffrey Loria doesn’t have enough money [#3] to keep losing $40 million a year even as the ballpark appreciates his and the franchise’s value [#4].

Marlins revenues from gate receipts, as per Forbes, averaged between $15.1 & $16.3 per fan [gate receipts divided by attendance] between 2007 and 2011 [click on spreadsheet within blog post]. Assuming a healthy 25% increase in per fan revenue to $20 per fan in the new ballpark, multiplied times the missing 500,000 fans, equals a nice round $10 million in missing revenue. A more accurate description of what had to occur to make up for the missing fans was to dump Heath Bell’s contract.

On the positive side, its good to know the Marlins are back to discussing the results of their yearly operations.  Let’s hope it’s not a 1 year thing, given that 2013 is looking a lot like 2006 through 2009.

Loria is sitting on a $450 million franchise with no discernible debt which can be attributed to operating the MLB franchise itself.  If he does not have enough cash flow to operate the Marlins, a logical assumption would have to be that he has used his MLB franchise to fund non-MLB personal interests. But even if those were the circumstances, he could still raise capital as needed by selling a portion of the franchise, as many other owners have done, and still be sitting on a huge payday when selling the club.

There’s a story there for journalists with the inclination and financial background to explore. The whole Marlins financial saga is a great example of why Malcolm Gladwell’s advice to young journalist’s was so accurate. This from his Time interview in 2009:

One of my favorite columnists is Jonathan Weil, who writes for Bloomberg. He broke the Enron story, and he broke it because he’s one of the very few mainstream journalists in America who really knows how to read a balance sheet…. He’s unique. Most accountants don’t write articles, and most journalists don’t know anything about accounting. Aspiring journalists should stop going to journalism programs and go to some other kind of grad school. If I was studying today, I would go get a master’s in statistics, and maybe do a bunch of accounting courses and then write from that perspective. I think that’s the way to survive. The role of the generalist is diminishing. Journalism has to get smarter.

Yet while we wait–even at this point in the story–Loria still gets the advantage of having the loudest megaphone in Miami repeating his unbelievable assertions about the Marlins finances.

It would have felt less dishonest, and been a more prudent business and baseball strategy, if the Marlins had done what the cheap and awful Pittsburgh Pirates did, getting a taxpayer-funded ballpark without even bothering to inflate the payroll with fan appeasement. That way, the Marlins could at least argue that they were abiding by some sort of careful and consistent baseball philosophy, looking for cheap value, exploiting market inefficiencies and waiting to spend that extra ballpark revenue when they were closer to winning.

The Marlins have never valued managers. But they traded prospects and spent millions on one they fired after a year — and will be paying for years to come.

The Marlins have always found effective closers without overspending. They spent millions on an old, fat one they sent away after a year — and will be paying for years to come.

Given that they also gave the Blue Jays $4 million in that everything-must-go fire sale, the Marlins might somehow pay people about as much to not work for them the next two years as they’ll pay people to work for them next year.

What kind of way is that to run a business? Making dumb mistakes, and then spending millions to make those dumb mistakes go away? It is a reckless stupidity that will handcuff future team spending, and it will play defense against the Marlins being good in the future even if by some miracle they do start making smart decisions and finding cheap value. Say what you will about the outrage that surrounds management, these people have always been good businessmen — excellent at making money, anyway — and they have a new bejeweled ballpark in our broke city to prove it. But they went about turning their most recent profit in the loudest, worst and most inefficient way possible.

The Marlins spent money like drunk rock stars at the winter meetings on whatever free agents happened to be available, abandoning their core principles with a recklessness that, while exciting, was not only out of character but also debaucherous. This cruel and random sport’s history is littered with expensive failures who thought it mattered to win the offseason. The Marlins did this to create a buzz that is now long forgotten, replaced instead by something the customers view as betrayal and deceit. This is actually the perfect team for the state of Florida, where we specialize in foreclosures.

Instead, what the Marlins keep doing is firing lower management again and again — Joe Girardi and Fredi Gonzalez and Ozzie Guillen. It is like watching a CEO run his business into the ground with recklessness and embezzlement while continually blaming and firing the company’s janitors.

The reason for those firings of managers has always been, well, you can’t fire the team. But they just got done firing the manager and the team.

The Marlins last off-season were like a gluttonous fat man at the all-you-can-eat buffet, stacking the plate with his eyes and appetite without regard to practicality or the oncoming food coma. The team overspent assuming we’d fill the ballpark, which we didn’t, and that meant losing about $40 million in that calamity of a season. Even though management didn’t have to serial-killer slash the payroll, there were going to have to be cuts, so the team decided to take a wrecking ball to the blueprint and just start again. It is terrible for public relations and awful for fans, but they were going to cut $40 million somewhere. Unlike Micky Arison, who lost money every year he owned the Heat except last year, Jeffrey Loria doesn’t have enough money to keep losing $40 million a year even as the ballpark appreciates his and the franchise’s value. We might feel better if Jose Reyes was still here, but what’s the point of that if you are going to have to trade your pitching staff to cut costs anyway?

This was businessmen behaving like businessmen. Sports owners didn’t get rich in their cutthroat worlds by doing the moral thing. There are no charities in charge of sports teams. Although what the Marlins did feels immoral and indecent, it is up to our politicians to protect us from it instead of just assuming that people who have behaved badly before would act now in good faith. And we didn’t even get to vote. You can’t blame snakes for being snakes without putting responsibility on the zoo keepers.

And now? Well, this betrayal is going to echo and cost the Marlins paying customers. There is only one thing about this entire organization that anyone trusts today. It is Giancarlo Stanton’s bat. That’s it. Word is he didn’t want to be here long-term even before this recent mess, preferring California. If the Marlins can’t afford him, and he doesn’t want to be here, you know what that means. His value is high, his salary is cheap, and the franchise is back to its core philosophy after all that drunken spending. You will never get more prospects for Stanton than you will today. And, already surrounded by howling, how much worse can the customer hostility possibly get?

Get ready to get angry all over again.

1 Response to Highly questionable or in the tank?