I know Mil Mascaras, but whose the Kid? 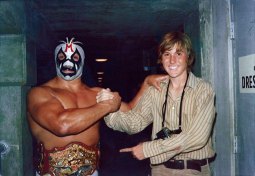 I want to take you back to a different time.  To the evening of March 5th 1977, where something odd and magical was happening in Miami. Elsewhere in America, Kiss was playing at the Rupp Arena and Wally Szczerbiak was being born, so not all was right. But Miami was different.  In Miami, Ela and Adolfo Costales were celebrating their 22nd wedding anniversary and Championship Wrestling had come to town.

They arrived at the Dinner Key Auditorium in Miami. They being professional wrestlers. The thought of them either brings a smile or a smirk. For you smirkers, take your politically-correct, oh-so-sophisticated-practically-effete sensibilities back to watching Oprah or MSNBC, talking about defining elections and speculating about the ‘best restaurant in town.’ This blog post ain’t for you’se. Perhaps, you would be more comfortable with a more delicate subject.

This tale is retold for anyone who appreciated that wrestlers had jobs–we speak now of the pre-Vince McMahon, pre-WWF era. Their jobs involved athleticism and showmanship.

In that way they remind me of Melville’s great reflection in Moby Dick about those of us with jobs:

“What of it, if some old hunks of a sea-captain orders me to get a broom and sweep down the decks? What does that indignity amount to, weighed, I mean, in the scales of the New Testament? Do you think the archangel Gabriel thinks anything the less of me, because I promptly and respectfully obey that old hunks in that particular instance? Who ain’t a slave? Tell me that.”

That December evening, after their jobs were done, the guys of the Mid-Atlantic Championship Wrestling sat around having a few beers, the finished bottles referred to as dead soldiers.When in through the door walks the tall scrawny kid who had been taking photographs. Everyone assumed someone else had asked him to do that. But no one had and it didn’t matter. The kid was accepted as one of the guys that night. The kid would never forget it.

Mil Mascaras, Thunderbolt Patterson, Johnny Weaver and the Deleon kid with the camera were all part of the show that night. The wrestling worker bees didn’t ‘take’ their act on the road, their act was always on the road. You get the sense that they loved what they got to do and constantly wondered how long they would get to do it.

Maybe that’s why they seem to appreciate all who helped them along the way, even unofficial kid photographers. That makes them very unlike our ‘performers’ today. I went a few times, dragging my Dad along and praying that the darn Commie–Boris [The Great] Malenko–wasn’t on the card that night.

We don’t know what became of the kid with the camera. He might be pushing up daises or just pushing bromeliads, but we are pretty certain that he got to pay forward the kind and classy way that professional wrestlers treated him on that night.

Everything you ever wanted to know about 1970’s Mid-Atlantic Championship Wrestling is copied in full at end of this post.

Comprehensive lists of the wrestlers and other personnel that appeared for Crockett Promotions during the 1st quarter of 1977, broken down by the main eventers, mid-carders & under-carders, big-name visitors, plus a list of those who entered and exited the area during the time period.

MIDGETS – None [these were the dark times – JC]