The first line from Jeff Passan’s column reads, ‘Florida Marlins president David Samson has perfected the art of doublespeak.’ That actually might be an understatement. Passan, of Yahoo Sports, points out how the recently released Florida Marlins financial statements has disclosures which make David Samson’s assertion on The Dan Lebatard Show this Wednesday that “Jeffrey Loria did not put a dollar in his pocket” a lie. This is a blog and I’m not a journalist, but I’ll highlight that Passan credits my blog as a good source of information about the Marlins finances. 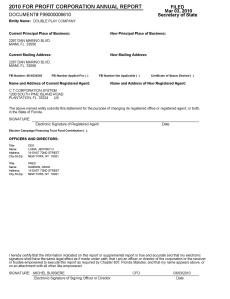 I’ll be writing more specifically about what’s in the financial statements — for example, what could possibly be the source of debts for a team that since Loria purchased the franchise in 2002, has had, according to Forbes, net operating incomeof $134 million through 2009 — but the key revelation in the Passan column is that the Managing General Partner of the Florida Marlins partnership is a Florida Corporation named Double Play [clever no?]. On the annual report filed with the State of Florida, a public document, Double Play’s officers and directors are listed as Jeffrey Loria [CEO] and David Samson [President]. The main disclosures in the Marlins financial statements which make David Samson’s statement untrue are:

Now pretend you are Loria and Samson. Earlier in the week you had been exposed with the release of the documents. Samson is now going to be on a radio program taking questions. There may be times in the career of people who speak publicly, when they might make unintended comments. I don’t think this could reasonably be considered one of those times. What David Samson said on Wednesday has to be considered the firm position of the Florida Marlins and Jeffrey Loria. What the experienced MLB executive decided to say was that “Jeffrey Loria did not put a dollar in his pocket.”

The reaction of the people on LeBatard’s radio show after their interview with Passan last night was revealing. They reminded me of a David Letterman joke about defending Pete Rose from charges of gambling: “Recordings, fingerprints on betting slips, bank statements, and corroborating affidavits? Hey Commissioner, let’s see some real evidence!”

Passan had noted the management fees and interest received, but did not get into the repayment of the loans. The hosts reaction — mind you, these were the same people who Samson had told one day earlier that “Jeffrey Loria did not put a dollar in his pocket ” — was to speculate whether the $5.4 million in management fees could not have been considered a salary, … and “who would begrudge them a salary,” … it was a “small amount of money, all things considered.”

The point is not whether the $5.4 million was salary [we don’t know], or if that salary was fair, the point is that the president of the Florida Marlins did not go on the air the previous day and say; ‘Aside from a fair salary, interest income and repayments of principal on a loan, the total of which is well into eight figures, Jeffrey Loria did not put any other dollars in his pocket.’

He did not say that for the same reason that he has been intentionally lying prior to the release of the financials. The reason is that owner of the Florida Marlins does not consider telling the truth a viable option given his objectives, a largely taxpayer-funded stadium and pocketing revenue sharing monies, instead of spending them as intended by MLB. What we’ve learned this week is that their willingness to lie remains unchanged.

Unless of course, we’ve all misconstrued the meaning of ‘pocket.’

The Jeff Passan column referenced is copied in full at end of post.

Florida Marlins president David Samson has perfected the art of doublespeak. Even after the mushroom cloud settled over the disclosure of financial statements that showed he and Marlins owner Jeffrey Loria are indeed duplicitous, Samson couldn’t help himself. Lies are simply part of how the Marlins do business.

The latest came during Samson’s weekly radio appearance on The Dan LeBatard Show in Miami, during which he addressed Deadspin’s publication of the Marlins’ balance sheet. What Samson said was so provably false that it was akin to a 3-year-old trying to hide his peas under a pile of mashed potatoes.

“Jeffrey Loria did not put a dollar in his pocket,” Samson said.

So programmed is that statement in Samson’s head, he keeps repeating it, like a robot with a shorted circuit. He’s right. Jeffrey Loria did not put a dollar in his pocket.

On Page 34 of the documents, under the heading Note Y, is a transaction called “Management Fee.” A corporation named Double Play Company is listed as the Marlins’ managing general partner. The partner is paid a yearly sum. For the two years the documents cover, the fees were $2.6 million and $2.8 million. In 2009, the documents say, the fee was raised to $3.2 million.

Records from the Florida Division of Corporations show Double Play’s CEO is Jeffrey Loria. Its president is David Samson.

Of the six teams whose documents were leaked, only the Marlins have a management fee listed in their operating expenses.

Earlier in the balance sheet, under Note L, is a one-paragraph section called “Related Party Promissory Note.” It explains that the managing general partner made a number of loans to the team at 1.5 percent to 1.75 percent above the London Interbank Offered Rate – a particularly high interest rate for the current lending climate, according to two accountants who reviewed the Marlins’ financials. Over the past two years, the loans have paid Double Play $1.83 million and $1.19 million, respectively.

While the financial records of Double Play are unavailable because it is a private company, at least $8.42 million went to the managing general partner in the past two years. Though the documents do not show that Loria has taken a direct distribution of money as owner, it is undeniable that he plundered the team’s coffers as it received nearly $500 million in public funding for a new stadium and more than $75 million in revenue sharing from MLB.

Samson did not reply to a request for comment.

The ugliness of the ballpark debt was apparent long before the documents surfaced. To help fund the $634 million stadium complex, Miami-Dade County commissioners voted to secure more than $400 million in loans, most of which are loaded with balloon payments. The worst is a $91 million loan that will take $1.2 billion to pay off. By 2049, the county will have spent $2.4 billion to cover its portion of the stadium.

The anti-Marlins groundswell in South Florida continued Thursday when Miami mayor Tomas Regalado asked the city attorney to look into renegotiating a $100 million parking-facility contract for the stadium complex. Political backlash was a given after the Marlins’ refusal to release their financial records during the push for the new stadium.

For years, the Marlins cried poverty. Loria threatened to move the team from Florida. Despite several sources claiming the Marlins raked in money — Forbes’ annual valuations for the Marlins have proven extremely close to reality, and Miami-area accountant Jorge Costales has written incisively about Marlins finances — the county commissioners voted in December 2007 to pay for more than three-quarters of the stadium due open in 2012.

Samson claimed on LeBatard’s show that the tax dollars will come from tourism money devoted to sports and convention complexes. That is only half-true. To free the tourism-tax dollars, the county shifted general-use monies from property taxes to pay other debt. Take from one hand, give to the other and buy an owner worth hundreds of millions of dollars a new toy from which he reaps damn near every cent, all with the money of hardworking citizens.

This was avoidable, of course, had the county commissioners refused to approve a deal until they saw the Marlins’ financial statements. The management fee was an obvious red flag. How could Loria and Samson say they didn’t have enough money for a stadium when they were paying themselves? The loan was another red flag. Such revelations almost certainly would have given the commissioners pause about offering the breadth of public financing they did.

Loria refused transparency. He is an excellent businessman, and he knew the repercussions. In the end, the Marlins hoodwinked local politicians so caught up in the excitement of keeping the team in Miami, they forgot with whom they were dealing. When hundreds of millions of dollars are involved in anything, people are going to lie, and Loria and Samson made statement after misleading statement and got away with it.

“I never go back to regret what I do because I make decisions based on the information provided to me, my conscience and what is best for those I represent,” said Rebeca Sosa, one of the nine county commissioners who voted for the stadium funding against four opponents — including Regalado, now the mayor. “The situation and information I have today in my hand is different than the one I had before.

“I still support the Marlins stadium.”

How Sosa, or any commissioner who voted yes, could stand by a potential $2.4 billion of debt with a clear conscience is difficult to fathom. The Marlins are up to their old tricks, still pussyfooting their way around the facts. All those years the team had the lowest payroll in baseball, Samson claimed money went to hidden costs in running a ballclub. One of them, he told Sun-Sentinel columnist Dave Hyde, was marketing.

“Eight figures,” Samson said. He told The Miami Herald it was among the most in baseball.

In 2008, the Marlins spent $9.8 million on marketing, according to their balance sheet. The Tampa Bay Rays spent $23 million, the Pittsburgh Pirates $17.1 million, the Texas Rangers $16 million and the Los Angeles Angels $10 million. The only team to budget less among the six whose financials were leaked was the Seattle Mariners, whom the Marlins outspent by $11,000.

This isn’t a white lie here, a fib there. It is systemic. Marlins mislead, public follows. The balance sheet was a gift to Miami-Dade County taxpayers who deserve – and have deserved since the “yes” vote – to know how the team they were endowing is run.

The poor, poor Marlins had an operating profit of $48.9 million in 2008 and 2009, including $11.1 million last year, when they increased payroll and started paying off their stadium debt. Loria has already doubled his money on the Marlins – he bought the team for $158.5 million, including a $38.5 million interest-free loan, and it’s now worth $317 million, according to Forbes’ valuations – and the revenue streams from the new stadium should only increase that figure. A county hemorrhaging jobs funneled tax money to fund a stadium for a team with a reckless disregard for its community’s welfare.

The politicians can pursue recourse, and the fans can bellow, and it doesn’t change the reality that a $91 million loan to the county will take 39 years and $1.2 billion to pay off, and that Jeffrey Loria still owns the Florida Marlins with David Samson as his president, and that the retractable-roof stadium, the one that’s 40 percent done, was built on lies that never seem to end.
———————————————-