When to Depart The Departed 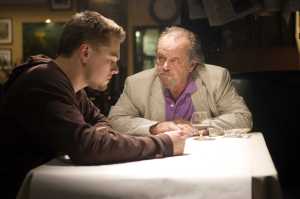 We are out there among you. We represent an outwardly unidentifiable sub-culture of intense movie fans that regard casual movie fans as unconscionable dilettantes. Outside the movie theaters, we can’t even tell who our fellow members are until someone goes into just a little too much detail or describes with just a little too much intensity a scene from some movie. That type of innocuous behavior may go undetected with the masses, but to fellow celluloid freaks (FCF’s), it represents a clarion call as effective as smoke signals among the Iroquois Indians. FCF’s are frequently surprised to discover one another. Once I was attempting to recall a classic movie line, “Luke, I am your father’s brother’s nephew’s cousin’s former roommate ” at a trendy happy hour bar and an unknown guy walked up to our group. He looked as though he had stepped out of one of those magazines which feature very attractive humans who stare somberly into the camera lens seemingly either puzzled by their genetic good fortune or miffed by the request to spit out their gum. He proceeded to repeat the line perfectly. Curiosity very temporarily getting the better of jealousy, I asked when he last saw the movie. “Years ago as a kid”, he responded. I was both impressed and depressed; I had seen the movie three times while on vacation with my kids just two weeks ago and had been flubbing it badly. Fearful that he would soon regale the group with details from his recent volunteer efforts in Calcutta – we, OK me – proceeded to subtly communicate that the Kumbaya moment had passed, so don’t let the door hit your phony light saber on the way out buddy. But, I digress.

That incident now makes me think about how FCF’s can identify themselves to one another. First, do we even want to know who other FCF’s are, a cautious yes. Special handshakes are out of course, my gut instinct is that a good many FCF’s rarely have, or deserve, human contact outside of family members. But since people have an innate need to stratify themselves , we can steer that stratification towards movies that have the right stuff – Tom Wolfe and by extension, Max Weber would approve. Clearly the two movies about the Corleone family should form the basis for any litmus test. We’ll start out slow; what did Clemenza ask Paulie Gatto to do and in which movie ? Or perhaps we should focus more on our fascination with movie minutia? Actually, forget those litmus tests. I have a better one. But first, let’s digress.

So what thoughts go through the head of an FCF as he watches a movie? Let’s use The Departed (# 42788) as an example. The movie was directed by Martin Scorsese and earns its R rating. I’ll dispense with any pretense to objectivity and tell you why I love Scorsese’s movies and this one in particular.

From my untrained and sycophantic eye, part of what makes him great – the ability to tell a great story is a given – is how he moves the camera and his extensive use of music. A great example of camera movement is in how Scorsese used a Steadicam to enhance the movie viewing experience in Goodfellas. In a long uncut segment of the movie, we move along with the actors through a constant jumble of people, the Copacabana’s kitchen and right up to the just prepared table, right next to the stage of course, to listen to Bobby Vinton . Or the time the camera rushed up to the lovely face of Rosanna Arquette as she smiled, I was mesmerized, to put it politely. A nothing scene had engrossed me – granted the credit should probably be distributed between Scorsese and Ms Arquette – but it’s an example of what I don’t notice in the work of other directors.

Scorsese also uses sound like some of the thugs he frequently portrays might use a 2×4 piece of wood; frequently twisting the volume knob, jarring use of sound editing and soundtracks replete with pop songs from the particular era. Mostly though, he is able to get me to feel his movies. I remember nervously watching a coked-out Ray Liotta avoid the cops and wondering, why am I nervous? Early on in The Departed, as Gimme Shelter , prophetically fills our ears and the camera slithers around the corner and into the local grocery – not unlike a rat sniffing for food – you feel uncomfortable as you watch the victimizer lining up his prey.

The inhabitants of that grocery store badly needed shelter from the local crime boss. His face initially obscured in the opening scenes, we are drawn into a world where appearances don’t just fail to tell the whole story; they routinely get it completely wrong. OK, we got our bad guy, complete with red background and devilish facial features; we got our damaged but essentially good guy hero, we got a love interest – we’re ready, let’s go. So off we go – following the paths of two recent Massachusetts State Police graduates with growing anticipation and increasing revulsion at the frequent tally of the un-dearly departed.

Soon after graduation, the movie departs from typical police drama formula by giving us one unforgettable version of how people are selected for police undercover work. Forget the Best and the Brightest, this selection process had more in common with the Best and the Tightest – psychologically that is. A graduate is ‘invited’ to do undercover work by having his family background brutally exposed. We’ve seen good cop, bad cop performed before, just never on fresh cop. The seemingly sadistic technique does appear to be effective though. Just when you think they got lucky that someone with the background of Leonardo DiCaprio’s character – Billy Costigan, the one recruited to be an undercover cop – entered the academy, you realize that the undercover recruitment efforts did not start with that interrogation. Just when you think that Billy Costigan could never have realized what he was signing up for, you realize no one would sign up if they realized what they were signing up for. Unexpectedly, a serious thought wades in. The next time I am tempted to conclude that people who signed up for military service really should not complain about being thrust into military service, I might recall Billy Costigan and be a little less certain in my views. Just when you start thinking with the movie, you don’t realize it, but you’ve been transported from your reality to another.

Once transported, FCF’s wonder why it is non-FCF’s wish to return so quickly. Here it is – the litmus test. FCF’s are far likelier to stay in their seats as the credits roll and await the 5-digit Motion Picture Association of America number, which appears at the true end of every movie. Only then can you be assured that every potential ounce of enjoyment has been squeezed from the movie.

As you sit there, you’ll want to recall the interesting, fun or quirky scenes. You’ll know the scenes are memorable if they embed themselves in your psyche over time; right along-side Michael Corleone’s (first) wedding night and Mel Brooks’ space troopers ‘combing’ the desert. The mind begins to race and catalog the movie-going experiences; a mental ‘sort’ of sorts. I remember the near riot at the summer-time ‘Fun Show’ at the old Paramount Theater downtown when I was 9; or when I was 19, the date, no sure thing, who requested popcorn in the middle of a movie. Christ, what were the odds of an un-ethical dilemma halfway through The Warriors; to butter up or not to butter up? Seconds later, denial scenarios having been examined and found wanting, I got up for my refreshment walk of shame – a visible sellout to the movie gods and other FCF’s.

The credits should mark the start of reflection on the movie, as names and duties stream down the screen. In The Departed, Jack Nicholson performed a hilarious impersonation of a rat. I don’t think I’ll forget that one soon. Jeez, Mark Walberg’s personal assistant is actually named Eric Weinstein like in Entourage! Or that the little girl extra in the airport scene, which you have to Tivo your brain to recall, was named Francesca Scorsese – wow, hope that’s his granddaughter. This is all taken in while blankly staring past those who quickly leave as soon as the credits appear, reality show heathen no doubt.

Nowadays, as I sit and scan the credits, I often simultaneously ward off the amateurish efforts of my kids, feigning gastrointestinal issues, to leave ‘early’. “I paid for the whole movie,” I frequently and patiently explain to my mortified offspring, who feel the wrath of stares, even in the dark. I trust there will be more things in time, but for now, there is one thing I expect my kids to experience as they, God willing, age. The accuracy of this prediction will be inversely related to the distance between them and their Father. They will remain glued to their movie seats as others depart. Unable or unwilling to explain, that they cannot rise because they are not all there yet; lost in a good movie or a sweet memory.