Who would have thunk it. The Miami Heat’s dynastic run was ultimately doomed by well meaning Abuelitas. Oh they look innocent enough, I know.

But we must approach the LeBron James departure autopsy with the cold-bloodlessness of an NBA executive deciding the fate of white Mid-American conference players on 10-day contracts right before they are guaranteed for remainder of the season. Emotion and sentimentality, like James now, are not our friends.

What were we thinking? We Miami Heat fans allowed the most talented NBA player of his generation, a player with obvious separation anxiety disorder issues, to wander freely in our city teeming with voluntary and involuntary transplants from Caribbean islands to major ¹continents, from upper Northeast America to the southern-most tip of South America, all speaking in one accented voice, on a worn-out string if you will, with one eventual message, ‘ay Lebroncito, if shoo c’only see my contree.’

In effect, we brought a homesick guy riddled with guilt into a community where everybody’s seemingly from somewhere else and are downright enthusiastic to inform all that their former homesteads are much superior to our community, save for their particular circumstances. Then we get blind-sided by his desire to return home. That’s some flat circle shit right there.

At first, I will admit that the news of his departure kinda blew me away. The Bosh signing was like a revitalizing [from a non-pet] chicken soup. By the time I watched Maria Bamford’s impression of Bosh [see below], I was almost ready to move on. Almost. I started having thoughts like, why can’t Jeffrey Loria get homesick? What will Pepe Billete do now? Eventually, the thoughts turned trivial. 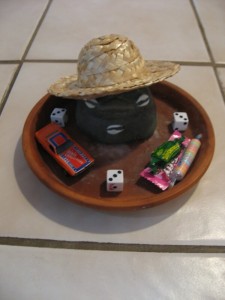 I certainly wish the great LeBron James all the best. Especially that he continue his remarkable streak of avoiding major injuries given all the minutes logged that come with 4 straight NBA Finals appearances and his other conglomerate responsibilities [said to be terribly taxing]. While no one should wish injury [e.g., ACL tear to left knee, takeoff leg] on an opponent, but neither should getting opposing fans to focus on morbid facts be considered beyond the pale. Unless of course, the people offended actually believe that the mere mention can cause the injury. I elegua not to believe in such things.

My point is that Cleveland fans will naturally fear injury more than any opponent. That are right to do so given the increasing likelihood of at least one major injury occurring in the career of a player who has logged as many minutes as James has. As opposing fans, it is our duty to promote their discomfort.

My favorite line after Brazil was routed in the World Cup rout was the observation, ‘I wish there were a German word for Schadenfreude.’ Pleasure in the failures of opponents is a big part of my sports enjoyment. From a practical point of view, such failures are a much more reliable source of pleasure than the success of your own team, unless you were a Miami Heat fan between 2010 and 2014.

So what represents the most responsible stance of opposing fans towards the good people of Cleveland. To begin preparing them now, or to allow their hopes to grow and be dashed yet again. I choose not to merely witness. Please join me in my twitter campaign, #sorryifwetookthebest4

¹- For those who asked, Asia is one of the continents I am referring to. While actual Asians are typically too busy studying or working to engage in nostalgia, that’s what I keep hearing from my Asian sources, i.e., people close to them, in their camp, with reason to know, people I don’t think would lie to me, people I hope are right so I can write this.