There was an interesting analysis of Hanley Ramirez’s numbers over at The Hardball Times by Derek Carty. Carty did the analysis to address the perception that Hanley Ramirez is the #1 player to be chosen in fantasy leagues. He basically says, Hanley’s great but his numbers don’t reflect a consensus #1 player. In fact they may be comparable to Jose Reyes for 2009. Below in the chart, I recreate some of his statistics and include Miguel Cabrera and Albert Pujols for comparison purposes.

After doing so, the following stands out: 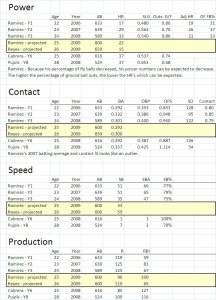