Why Milton Friedman Was Right

Milton Friedman’s most famous example of how free markets operate began with a pencil, but today’s iPhone is just a more sophisticated version of a product whose DNA is made possible by free markets.  Take a look at the graphic below.  No government’s industrial policy would have resulted in producing today’s iPhone.  It is a great reminder of why the lessons of Milton Friedman still matter.

A WSJ article highlights problems with reporting trade statistics. The entire WSJ article is copied at end of post. 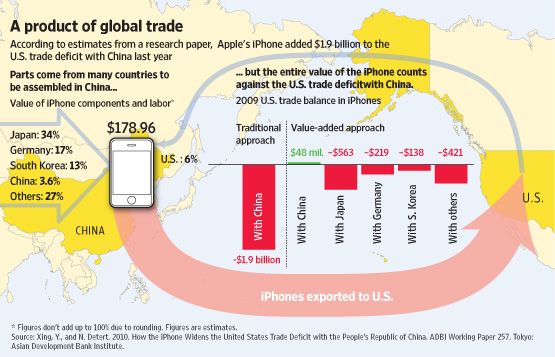 How the financial impact of an iPhone can be measured

BEIJING—One widely touted solution for current U.S. economic woes is for America to come up with more of the high-tech gadgets that the rest of the world craves.

How is this possible? The researchers say traditional ways of measuring global trade produce the number but fail to reflect the complexities of global commerce where the design, manufacturing and assembly of products often involve several countries.

“A distorted picture” is the result, they say, one that exaggerates trade imbalances between nations.

Trade statistics in both countries consider the iPhone a Chinese export to the U.S., even though it is entirely designed and owned by a U.S. company, and is made largely of parts produced in several Asian and European countries. China’s contribution is the last step—assembling and shipping the phones.

So the entire $178.96 estimated wholesale cost of the shipped phone is credited to China, even though the value of the work performed by the Chinese workers at Hon Hai Precision Industry Co. accounts for just 3.6%, or $6.50, of the total, the researchers calculated in a report published this month.

The result is that according to official statistics, “even high-tech products invented by U.S. companies will not increase U.S. exports,” write Yuqing Xing and Neal Detert, two researchers at the Asian Development Bank Institute, a think tank in Tokyo, in their report.

This isn’t a problem with high-tech products, but with how exports and imports are measured, they say.

The research adds to a growing debate about traditional trade statistics that could have real-world consequences. Conventional trade figures are the basis for political battles waging in Washington and Brussels over what to do about China’s currency policies and its allegedly unfair trading practices.

“What we call ‘Made in China’ is indeed assembled in China, but what makes up the commercial value of the product comes from the numerous countries,” Pascal Lamy, the director-general of the World Trade Organization, said in a speech in October. “The concept of country of origin for manufactured goods has gradually become obsolete.”

Mr. Lamy said if trade statistics were adjusted to reflect the actual value contributed to a product by different countries, the size of the U.S. trade deficit with China—$226.88 billion, according to U.S. figures—would be cut in half.

To correct for that bias is difficult because it requires detailed knowledge of how products are put together.

Breaking down imports and exports in terms of the value-added from different countries can lead to some controversial conclusions. Some U.S. lawmakers, for instance, argue China needs to let its currency rise significantly against the U.S. dollar in order to reduce the trade gap between the two nations.

The value-added approach, in fact, shows that sales of the iPhone are adding to the U.S. economy—rather than subtracting from it, as the traditional approach would imply.

Based on U.S. sales of 11.3 million iPhones in 2009, the researchers estimate Chinese iPhone exports at $2.02 billion. After deducting $121.5 million in Chinese imports for parts produced by U.S. firms such as chip maker Broadcom Corp., they arrive at the figure of the $1.9 billion Chinese trade surplus—and U.S. trade deficit—in iPhones.

If China was credited with producing only its portion of the value of an iPhone, its exports to the U.S. for the same amount of iPhones would be a U.S. trade surplus of $48.1 million, after accounting for the parts U.S. firms contribute.

Other economists say some aspects of the researchers methodology may have led them to overstate their case. The study, for example, assumes that companies such as Toshiba Corp. and Samsung Electronics Co. that make components for the iPhone wholly assembled them in their home countries.

But many of Apple’s suppliers have manufacturing facilities in China, so it’s likely that some portion of the components they build for the iPhone are made in China as well.

The latest results are broadly similar to analyses made by the Personal Computing Industry Center at the University of California, Irvine, of the trade and manufacture of another Apple product, the iPod. That research also found that Chinese labor accounted for only a few dollars of the iPod’s value, even though trade statistics credited China with producing its full value.

In a speech in September in New York, Chinese Premier Wen Jiabao cited that research to argue that trade tensions between the U.S. and China are overblown. Many of China’s exports are products that are made in China on contract for foreign companies, he said, so the U.S. shouldn’t criticize China for running a big trade surplus.

“Foreign-funded enterprises, including those of the United States, are major beneficiaries” of this system, Mr. Wen said.
—Loretta Chao contributed to this article.

Write to Andrew Batson at andrew.batson@wsj.com