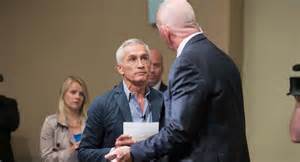 Ramos already standing on a soapbox

Univision network’s diminutive anchorman, Jorge Ramos, has pointed his cannon at John Paul II and the Catholic Church. Fortunately for us Catholics, his is a short cannon with limp arguments, as I will detail, but first a little background.

The Univision network has the largest audience of Spanish language television viewers in the United States. It’s popularity is largely due to telenovelas and the network’s sports coverage [mostly soccer]. It’s audience is overwhelmingly [around 70%] Mexican-American.

Spanish-language television is dependent on immigration from Spanish speaking countries. The reason is that their audience consists of persons who have yet to learn English or are too old to master a second language. Of those two groups, the former will likely learn English and the latter will pass, either away or onto a demographic that is worse than death for advertisers, an unprofitable one. As an immigrant parent, I can attest to the difficulty of passing along our native language skills [such as they may be] to the next generation. The reality is that we immigrants are desperate to fit in, and fitting in means not only English, but American culture. So whatever their audience today, Univision’s audience in 10 years is mostly living in another country today.

In a shocking development, it turns out that Jorge Ramos is pro-Mexican immigration. Ramos’ heroic stand in the face of…. OK it’s not heroic. It may actually be part of his job description. Ramos has even written a book in defense pro-Mexican immigration policies [did I mention that Univision’s audience is around 70% Mexican-American?]. No wait, Ramos has written four books and one manifesto [no joke] about the issue. You know the old saying, it’s hard to keep a man of self-serving ideas down.

Now Ramos has decided to spread his intellectual, such as they may be, wings. The display was unimpressive. Scattered among his laundry lists of anti-Catholic sentiments, Ramos had criticisms of the beatification of John Paul II in an opinion piece which recently appeared in El Nuevo Herald on April 25, 2011. His specific points were:

Why those arguments are a fig leaf for anti-Catholic sentiments

As to the quality of his arguments above, I am an agnostic as to whether Mr Ramos is either careless, ignorant or just a poor writer. But I am sure that he is anti-Catholic. It was not hard to find additional evidence of his critical, but thankfully incoherent, views on my faith. This from an column on April 18, 2005. [I was unable to locate a current link – JC]:

First and foremost among those things that irk one with regard to the Catholic Church is the disparity in its approach to its dealings concerning men and women. How is it possible that well into the 21st century, a girl can be barred from the priesthood or from becoming Pope by the mere accident of having been born female? Is it really inconceivable that a woman can have the endowments required to be a leader of the Church?

The keynote of the education my 18-year-old daughter, Paola, has received thus far is that there is nothing to which she cannot aspire, and that there is absolutely no reason whatsoever—and I mean none—for her to feel inferior to any man. But Paola, who made the decision on her own to make her First Holy Communion, soon discovered that her religion discriminated against her because it does not offer her the same choices and opportunities it offers to men. Why? Just because she is a woman.

I think it’s fair to criticize us Catholics for our beliefs. But when the criticism ignores the scriptural foundations of those beliefs, then we know the person making the criticism is more of a poser, or in a term the Univision audience can more relate to, ‘una postalita.’ For example, based on the paragraphs noted above, I would respond:

As Catholics, we need to be aware of all our blessings. In this case, we should be thankful for the short-comings of our enemies, people with little intellectual fire-power like Jorge Ramos, ANCHORMAN!

8 Responses to Jorge Ramos: Small man with even smaller ideas