Wenski Has Much Currency On Immigration

In the first chapter of his book, Money Mischief, Milton Friedman relates an example of how some islands in Micronesia used round stones, anywhere from one foot to twelve feet in diameter, to represent currency. [It is unknown whether this is where the phrase, ‘he’s got stones’ originated.]

In one case, the German Government, on purchasing the islands, attempted to get the island chiefs to repair the roads. The locals resisted. The Germans levied a fine which was extracted by marking a number of the most valuable stones with a black cross. The act impoverished the chiefs and forced them to fix up the roads. The fine was recognized as paid when the officials washed the black mark from the stones. Wealth had been temporarily taken and then restored by affecting their currency.

The point of the story is that currency can take on many different forms. Currency is merely a tangible representation of wealth. Wealth must be created by the land or labor of society. If governments create currency unrelated to the actual wealth being created in the society, then we get what we have today; TARP, Ireland, Greece, Spain, and …. 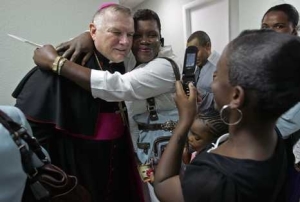 Take a look at the picture above. The love and respect shown Archbishop Thomas Wenski represents currency in the immigration debate. In the parlance of the day, the dude in the black cape is seriously loaded. He was not given that currency, he earned it. This from the Miami Herald’s article about his return to Notre Dame d’Haiti:

As he entered the Little Haiti Catholic church he founded 29 years ago, a crowd of thousands, some with tears of joy, quickly gave the Most Rev. Thomas Wenski the treatment of a rock star on Sunday. Waving their hands in the air, they snapped photos, held out tape recorders and clutched portraits of him.

For the estimated 2,500 Haitian Catholics from across South Florida who came to Notre Dame d’Haiti — a crowd typically reserved for Christmas or Easter — the event was not to be missed. The beloved Polish-American priest, one who had guided the region’s Haitian-American community since its early days, had returned, this time as the new archbishop of Miami.

“Many of us are who we are because of you,” the current pastor, the Rev. Reginald Jean-Mary, told a teary Wenski, who celebrated Mass in perfect Creole for more than two hours in the standing-room-only church.

On Sunday, after celebrating two English Masses and a Spanish Mass days before, Wenski proudly slipped back into the role he has long played: a champion of Haitian Catholics, who represent a majority of the island nation’s vibrant community in South Florida. “Notre Dame, this church here, it represents the Haitian community,” Wenski said to parishioners, many who skipped work and some who traveled from as far as West Palm Beach to meet the pastor they still affectionately call Pè, or Father.

An overflow crowd jammed the church’s courtyard and hallways and packed hundreds of outdoor chairs as a closed-circuit TV system broadcasted the 59-year-old’s remarks. It was his first stop at Notre Dame since he was tapped to lead the region’s 800,000 Catholics in late April.

The celebration, full of upbeat hymns, dancing and praiseful “hallelujahs,” brought together faithful churchgoers as well as those for whom church isn’t always a Sunday ritual. There were grandmothers who had not seen Wenski for years, teenagers who he had baptized and those who had only heard of him through word-of-mouth.

“This is a good Haitian friend,” said 55-year-old Jean Bourgiquot, who had never met Wenski, but echoed a common refrain: Wenski isn’t just a man that knows Haitians, but “a Haitian.”

Archbishop Wenski, has weighed in on the immigration debate. This from his Op-Ed in the Miami Herald:

Victor Hugo’s 19th-century novel Les Miserables tells how pride and neglect of mercy represented in the bitterly zealous legalism of Inspector Javert ultimately destroys him. Today, modern-day Javerts, on radio and TV talk shows, fan flames of resentment against supposed law breakers, equating them with terrorists intent on hurting us. However, these immigrants ask only for the opportunity to become legal — to come out of the shadows where they live in fear of a knock on their door in the dead of night or an immigration raid to their work place. Like Jean Valjean, today’s migrants only look for the opportunity to redeem themselves through honest work. Today, many take umbrage at the Catholic bishops’ advocacy on behalf of these “illegals” — but, in doing so, we stand in a proud moral tradition, like the novel’s benevolent Bishop Myriel, who gave his candlesticks to the desperate Jean Valjean and protected him from arrest by Javert.

While I myself am sympathetic to the Arizona law — i.e. what are border states supposed to do when their urgent concerns are not shared by their federal government? — my thoughts and votes on this issue can be affected by those who come to the debate with serious moral currency.

In this sense, and this sense only, Archbishop Wenski is the anti-Crist.

Back in Novemebr 2008, there was an interesting article about seminarians at St. John Vianney by one of the writers of the Wenski article, Jaweed Kaleem. One of the most positive [i.e. fair] articles on Catholics, was possibly written by a Muslim [my assumption based on his name]. As the old saying goes, only in Miami.

Wenski’s Op-Ed in the Miami Herald on Immigration Reform is copied in full at end of post.

To those who accused Jesus of breaking the laws of his day, he replied, in Mark 2:27: “The Sabbath was made for man, not man for the Sabbath.”

This teaching underscores the point that positive law, even Divine positive law, is meant to benefit, not to enslave, mankind. The patriots who broke the law by tossing tea into Boston Harbor understood this — as did Rosa Parks, who broke the law by refusing to give up her bus seat to a white man. When laws fail to advance the common good, they can and should be changed.

Our immigration laws need to be changed: They are antiquated and inadequate for the promotion and regulation of social and economic relations of 21st-century America. On this point everyone seemingly agrees. However, the solutions proposed should not make the situation worse. Outdated laws, ill adapted to the increasing interdependence of our world and the globalization of labor, are bad laws. Proposed changes, however, must take into account both human dignity and the national interest.

For this reason, the U.S. bishops and a broad bipartisan coalition ranging from unions to chambers of commerce have supported broad comprehensive immigration reform that, while addressing future needs for labor by providing for a legal guest-worker program, also offers an “earned” path to legalization for those 10 million or so workers already in the country as well as fixing the unacceptable backlogs for family reunification visas that keep families separated for intolerable lengths of time.

A narrow, restrictive legislation focusing on solely “enforcement” will only make matters worse. Indeed, a billion dollars has been spent on border enforcement over the past 10 years — and yet, until this current recession, illegal immigration had increased because the labor market demanded willing and able workers. Illegal immigration should not be tolerated. It leads to abuse and exploitation of the migrants themselves; and, ultimately, businesses that rely on their labor — and, in doing so, help fuel the growth of the American economy — would prefer and benefit from a reliable, legal work force.

Victor Hugo’s 19th-century novel Les Miserables tells how pride and neglect of mercy represented in the bitterly zealous legalism of Inspector Javert ultimately destroys him. Today, modern-day Javerts, on radio and TV talk shows, fan flames of resentment against supposed law breakers, equating them with terrorists intent on hurting us. However, these immigrants ask only for the opportunity to become legal — to come out of the shadows where they live in fear of a knock on their door in the dead of night or an immigration raid to their work place. Like Jean Valjean, today’s migrants only look for the opportunity to redeem themselves through honest work. Today, many take umbrage at the Catholic bishops’ advocacy on behalf of these “illegals” — but, in doing so, we stand in a proud moral tradition, like the novel’s benevolent Bishop Myriel, who gave his candlesticks to the desperate Jean Valjean and protected him from arrest by Javert.

For this reason, we call upon Congress to seize the opportunity for a comprehensive fix to our broken immigration system. To date, its failure to act has contributed to neo-nativist anti-immigrant sentiment and to ill-advised initiatives like Arizona’s recent immigration law that usurps what is the purview of the federal government.

A nation that honors lawbreakers like the patriots of the “Boston Tea Party,” a nation that can allow the dignified defiance of Rosa Parks in her act of lawbreaking to touch its conscience, is a nation that also can make room for modern-day Jean Valjeans. We can be a nation of laws, without becoming a nation of Javerts. As Jesus reminded the embittered zealots of his day, laws are designed for the benefit — not the harm — of humankind.

Thomas Wenski is the archbishop of the Archdiocese of Miami.

6 Responses to Wenski Has Much Currency On Immigration