Cuban government property on US tour 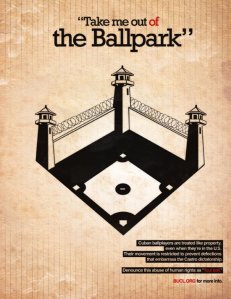 Bloggers United for Cuban Liberty have asked all like-minded blogs to focus attention on the unusual scenario which involves the Cuban National baseball team when it travels.

Take me out of the ball game,
to roam freely, I’m not allowed.
Not to get peanuts or cracker jack,
fidel will be angry if I don’t go back.

Let me walk, walk, walk in the city,
if I defect it’s no shame.
For it’s one, two, three steps, I’m gone,
from the old ball game.

Thanks for the heads-up at Babalu. See a list of Cuban Baseball facts at end of post.

* The Castro regime views Cuban athletes as property that it has developed and owns not as individuals with individual rights. The official view of the regime is evident in the words of a Cuban sports official: “It is absolutely unfair that the rich countries — based on their economic capacity, offers of scholarships or gifts, conditions of life and other elements — take away the sporting talents of the poor nations, just as they rob the scientific brains,” (José Ramon Fernández, the president of the Cuban Olympic Committee — August, 2000)

* [Fidel] Castro…who often cites Cuba’s athletic achievements as proof of the superiority of Communism, likened such athletes [defectors] to Judas, accusing them of being willing to ”sell out their country for 40 pieces of silver.” (New York Times)

* “The option not to play in the [World Baseball Classic] tournament, which has been exercised by the Yankees’ Hideki Matsui among others, is not available to Cuban players – if the government tells them to play, they must. On the other hand, the regime can suspend a player from ‘Team Fidel,’ as the national team is often called, simply out of suspicion that he might defect. This happened to Orlando Hernández, before he managed to escape in a boat and eventually find fame with the Yankees.” (Roberto Gonzalez Echevarria)

* “Players are also not allowed to make critical remarks about the government to the foreign press, an act prohibited by a law known as ‘ley mordaza,’ or the ‘gag law.'” (Roberto Gonzalez Echevarria)

* “[Cuban ballplayers] have no unions and no agents. And they must engage in the institutionalized hypocrisy (copied from the former Soviet Union) of being amateurs, temporarily away from their jobs. The result is that their pay is meager and that they are under total control of the state’s Orwellian sports bureaucracy.” (Roberto Gonzalez Echevarria)

* “If [Cuban athletes] manage to escape, they cannot set foot in Cuba again for five years, and their families are often subject to harassment by government-supported mobs…” (Roberto Gonzalez Echevarria)

* “Castro uses baseball as a propaganda vehicle, and surrounds Cuban players with round-the-clock security so they are unable to defect to the U.S.” (U.S. Congresswoman Ileana Ros-Lehtinen)

* “Castro also forces the families of players to stay on the island to ensure that the athletes will come back. They are not free to decide their fate.” (U.S. Congresswoman Ileana Ros-Lehtinen)

* Miriam Murillo-Flores, the wife of major league pitcher Jose Contreras, describes her treatment after her husband defected: “I had an interview with the immigration authorities in Havana on April 27 and they told me I had to wait five years, until people had forgotten about Jose. This has nothing to do with politics. I am just a housewife trying to get her family back together. But now I – and the children – have to pay for what he did.” Murrillo Flores had to escape Cuba by way of human smugglers because the Castro regime refused to provide her an exit visa.

* The Castro regime enlists the aid of foreign governments to prevent defections of Cuban athletes in those countries: “Our mission tonight is to ensure that no Cuban defects,” [one Dominican soldier] said on condition of anonymity.” If one defects, they´ve threatened us with jail, and said they would dismiss us from the army”. (Alejandro Guevara Onofre)

* According to baseball agent Joe Kehoskie, the Castro regime has been using a bonus system to keep Cuban players from defecting. Players are awarded varying sums based on team performance but the awards are only given if the entire team returns to Cuba without any defections. In this way the regime creates peer pressure among team members to discourage any from exercising their right to defect.
———————————————————————