A Great Day to Citizen Watch and Listen

I took some surefire ideological neutralizing medication yesterday for lunch. I first tried the drug treatment back in November, with great effects. It involves meeting people–regular people, not the type of people who inhabit cable political shows which even mild-mannered accountants would gladly consider exposing to deadly viruses. No, the type of people that actually have jobs, bosses, payrolls to meet and memories of segregated buses with white lines running down the center. 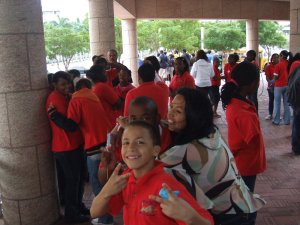 So I trekked downtown to the Arsht Center yesterday at lunch to watch the inauguration with 4,500 of my fellow citizens. I did so with my cousin / photographer, Rolando Gonzalez. Part of the festive atmosphere was attributable to a number of school children who had been bused in. I wonder how they’ll remember the day. Safe to say the event probably did not register as much yesterday, as it will when they look back and recount that they were there.

After Obama’s speech, clipboard safely in hand, we stopped people as they were leaving and asked what their impressions were. It was a privilege to interact with people who, for the most part, had just watched their dreams being realized. I kinda wish someone had a camera and blog back in 1981…. Here is who we met: 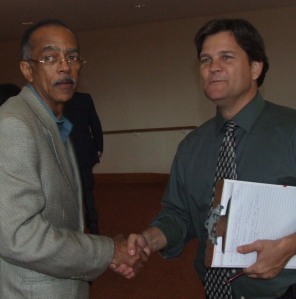 “I am for the type of things he stands for; decency and competency. He’s not about black and white or race issues. I think the people see that in him and that’s why he has their confidence at the outset.” 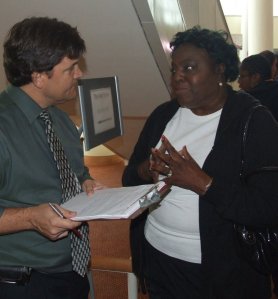 “It was magnificant! I truly hope the good feeling we are experiencing in our country lasts.” 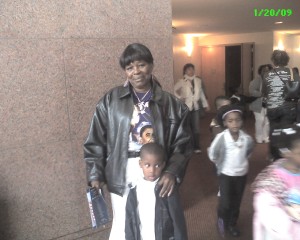 “I’m just overwhelmed. I am initially from Columbus GA

and have seen a lot in our country. It’s a pleasure to see people coming together as one.” 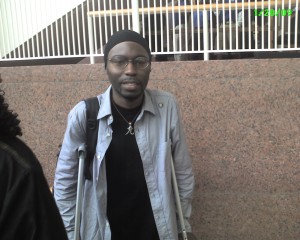 “I’m so impressed. I did not expect to see this in my lifetime. The surprising part is all the young people who he has attracted to politics instead of MTV. How can you not be inspired?”

[I had one of those moments when you realize how little you know. I noted to Mark that I did not vote for Obama, he replied, “neither did I.” Boom, as Ari Gold would say–JC] 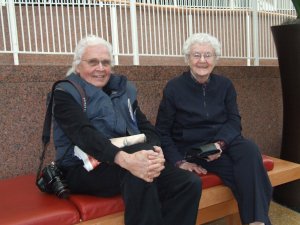 “Wonderful! I loved the history of it all. It says so much about our country.” 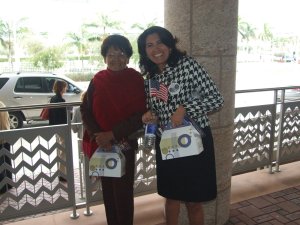 “As a minority myself, from Peru, it is very special to watch what has happened. Dreams can come true, that’s why this is America. It was a great idea to allow people to gather here and share in the excitement.” 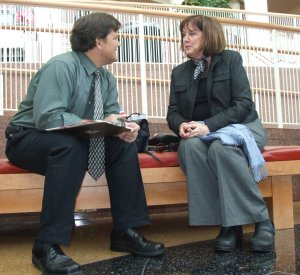 “This is wonderful. I’ve waited a long time to see the type of solidarity we’re seeing in this country today. I think there is healing taking place.” 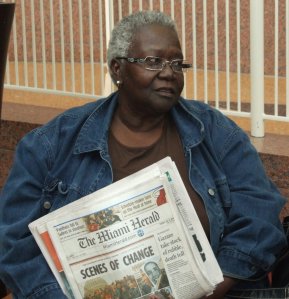 “Fantastic! I have seen history. I’ve lived long enough to see some remnants of segregation–a white line running down the middle of public buses–so I never thought this day would happen.” 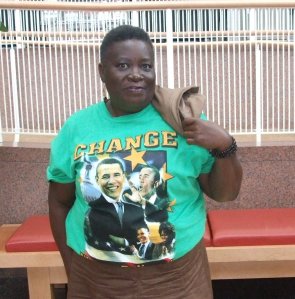 “I’m just so happy today. While I would have loved to have been there in DC, being here was the the 2nd best thing. I love the Arsht Center as well. I’m also glad they brought all these kids to see it. It’s important.” 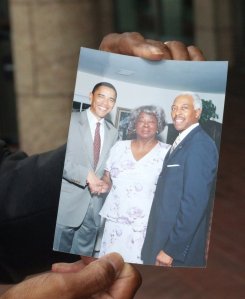 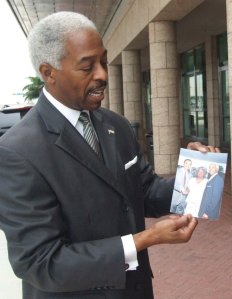 “I think this will go down as one of the greatest days ever. The world looks different today than it did yesterday and I believe it feels differently about itself as well. Ours is a country with every race and one people, we can say that with more confidence today than ever.”

[Robert held up a picture taken with his Mom and Obama, back in 2005. Mrs. Beatty is now deceased, may she rest in peace–JC].