Through the eyes of a believer 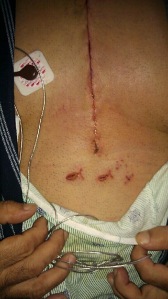 Quick, what do you see in the photo to the right? Go ahead and click on it, I’ll wait.

If you see the mid-section of a male who recently underwent successful bypass surgery, the good news is that you are accurate.  The bad news is that your logical answer is a likely indicator of an under-utilized imagination.  [Please contact me for your Republican Presidential absentee ballot]. Imagination is a definite requirement for our purposes here.

If you see the remnant of sutures on the lower abdomen which remind you of Goldfish crackers, you at least show more imagination than the previous Republican. However, your answer also reveals an Oprah-esque appetite which makes this photo an eerie preview of how your own chest cavity might appear in the not too distant future.

What the subject of this photo saw when he peered down his own chest was a reminder of God in the form of an Ichthys, the popular symbol of Christianity.

An over-active imagination? Perhaps. But our subject did not arrive at his perspective lightly or alone.

… the representation of familiar things from unsuspected angles, under new lights of the imagination, that we might see them with the innocence of surprise.

Go figure. Part of maturing in the faith entails retaining, or recapturing, our imagination and innocence. As Jesus implored, becoming “like little children” [Mt 18:3].

Getting back to our photo. Are you child enough to look past the scar? To the Grace behind a second chance. Or to the miracle of medical advances, in that the surgery did not exist when our subject was born.

If not a God, can you sense a certain ‘magic’ in this world? If you can, that’s good enough for now. Chesterton himself was not always a believer. But he did always have a sense of magic in or about the world. That appreciation one day led him to wonder that if the world had magic, might it also involve a magician?

Click here for more quotes from a trio of Englishmen born in the 19th century whose talents have fueled many imaginations into the 21st.

Thanks to Anaut for agreeing to have the surgery in order to facilitate this blog post. Talk about taking one for the team.