Does anyone know how to contact the equivalent of the DEA in South Africa? I got one hell of a tip for them tonight.

Argentina was slaughtered in their World Cup quarterfinal match on Saturday. They surrendered — the French are thrilled this sentence can now be written to include another country — to the Germans, 4-0. A quick review of World Cup championship matches [including 3rd place vs 4th place finishers] with a four goal differential since 1930, yielded only one other loss of that magnitude. However, that loss by Bulgaria came at the hands of Sweden in 1994, a team seen as much superior. While this match was only a quarterfinal, both teams were considered legitimate contenders to win the Cup. If anything, Argentina’s team featured more established talent – including the world’s top player in Lionel Messi – while Germany’s talent was considered too young before the tournament began.

So the Argentine team cracked in a historic manner on Saturday. Speaking of crack, Argentina is coached by Diego Maradona, an anti-American druggie whose urgent need for the limelight resembles a dog who continues to lick the part of the sofa where a sugary substance once resided. The dog must know it’s gone, but he acts determined to bring it back, even if it means that his tongue is sacrificed in the process. In this case, Argentina’s World Cup chances were the item being sacrificed so that Maradona could lick the spotlight one more time before he relapses.

This from an Argentinian fan blog before the game:

The time has come to discuss about a quarter final that is very special to all of us. The past is still very fresh and painful, and us, argentinos expect nothing else than a victory from our magnificent players.

In order to beat Germany, the coaching staff will have to calm down (Maradona), analyze and think about some important issues.

Which system to use? In my previous thread opening, I’ve mentioned some important tactical problems related to the 4-3-1-2. A system that we all obviously know very well, so it’s easy to understand what isn’t working. Against Mexico, Corea and Greece, we all noticed that:

– Germany perfectly know how to beat 4-3-1-2. They perfectly know that once they pass the Tevez-Messi-Higuain line, it won’t come back, and that the best way to beat us is to attack from the wings and use the space left on purpose by our 7-men-midfield to cross and find Klose. This is the tactical reason why we conceded one of the most hurting gol ever (2006).

Calm down? Mr Lopez [the blogger], do you understand what you are asking? A medical perspective:

“Typically, patients with cocaine overdoses in the emergency room are treated with nitroglycerin, sedatives such as Valium, and some blood-pressure medications such as calcium channel blockers and some beta blockers,” Dr. Vongpatanasin said. “However, the standard treatments don’t alleviate all of the adverse effects of cocaine on the heart, blood pressure and central nervous system.”

Argentina put it’s World Cup hopes on Humpty Dumpty. Watch Castro and Chavez try and put him back together again. 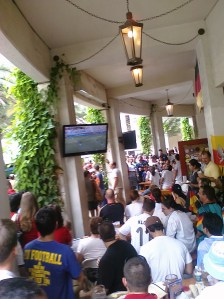 Sensing the prospects of a collapse, I wanted to enjoy it among other World Cup fans so my day started at Fritz & Franz Bierhaus in Coral Gables. Great atmosphere for the match, but not nearly enough space for the large crowd. Thankfully, Germany scored very early on and I was surprised at how quiet the Argentina fans got for the rest of the half. I feel for the Germany fans. They seemingly root with a handicap, they mustn’t be too angry or organized in their cheering.

Spreading my enjoyment, I saw the 2nd half at the Italian Sports Grill in the Fountainbleau area. I figured it was my best chance for a pro-Germany crowd. No crowds there, which was just as well. I was able to thoroughly enjoy the beating being administered to Maradona’s club – ‘enjoy’ entails shouting insults every time the bearded midget appeared onscreen – with impunity.

Again, South African DEA, call me [making hand motion while extending thumb and little finger, curling the base and middle knuckles of the other 3 fingers].