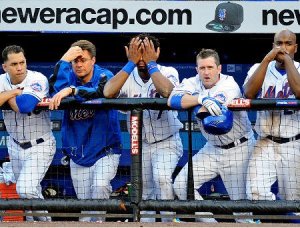 Like the demon Pazuzu leaving Regan MacNeil for Father Damien Karras; the weak, timid, under-performing, over-rated, testosterone deficient, male-model effete-like, sorry excuse for a ‘heart’ which inhabited the Chokeapalooza festival of a team otherwise known as the 2007 and 2008 New York Mets has landed squarely in the upper torso cavity of the 2008 New York Jets.

The job of executioner in the last World Series game played at Yankee Stadium and the three most recent New York sports teams collapses have been Miami-based professional teams. The sports gods are rewarding us in recognition for having provided shelter to ignorant and alcoholic New York sports fans for such a long period of time in our sports complexes.

While we will not be the beneficiary of their glorious misfortune much longer–the departure of Isiah Thomas was a Nostradamus-like signal as the the end of the New York sporting equivalent of the Rapture–their next collapse, scheduled for 2010, will be even more crushing than the last 3 combined, so spoketh Zarathustra on the WFAN recently:

The term ‘ignorant and alcoholic’ was used eight times in the body of this post. I state this because ignorant and alcoholic New York sports fans will be tempted to say that it was ‘like a hundred times, man.’ Learning to count will not affect your collective manhood. Realizing how much time you spend in the company of other men in ‘snuggle’ weather, creating emotional ties to those men and desperately seeking to touch each other immediately after a team success, might however.

All Isiah Thomas insults referenced are copied in full at end of post.

They had Manhattan buzzing as recently as two months ago. That’s the way it works in New York. They make the classic panic trade for Marbury, look good for a week in January and naturally everyone starts thinking about the Lakers in June.

You can guess where I stand. Right after Isiah Thomas was hired last December, I predicted in The Magazine that he would run the team into the ground. This franchise was already headed nowhere — no cap space, no All-Stars, little hope. It was a situation thatcried for patience. Whomever took over for the Artist Formerly Known As Scott Layden needed to blow everything up, create cap room and start over. In other words, the Danny Ainge Approach — clean house, make some panic trades, ignore the cap — couldn’t possibly work here.

The Jerry West Approach seemed like a much better plan. Take your time. Stockpile assets. Only deal from strength. Think four years instead of four months. And most importantly, don’t panic.

Unable to wait even three weeks after moving into his new office, Isiah pulled a Jim Fassel and pushed his chips to the middle of the table, dealing his few tradeable assets (two coveted Europeans, two first-rounders and cash) for Marbury and Penny Hardaway — two more ghastly contracts — in the process, blowing his long-term cap flexibility to smithereens and insuring that the 2006 Knicks would look exactly like the 2004 Knicks.

Trish
Let’s face it, every one of us would keep Trish around.
Seduced by Steph’s pedigree and anxious for a change — any change — New York fans embraced the trade. It was like the current Bachelor becoming enamored with Trish, the trashy, conniving, homewrecking model who looks stunning in a cocktail dress. You can have a million warning signs, you can even have a friend planted in the house telling you this girl is sleaze … and you still can’t help picking her for the Final Six. Just to see what happens.

And yes, there’s something about Marbury’s game. He always makes you feel like his team has a puncher’s chance, that he can catch fire at any moment, maybe even take over an entire game, win a series by himself, carry you a couple of rounds. Even though it hasn’t happened yet. And may never will. But that potential gets people talking about the team. Gets the arena buzzing before games. Gets people calling into the Fan. Gets those blue No. 3 “MARBURY” jerseys moving out of the Pro Shop like hotcakes.

With all this commotion, it was easy to forget that, if this was a Texas Hold ‘Em Tournament, Isiah had just gone “all-in” after two hands. Knicks fans happily chugged the Kool-Aid, conveniently ignoring the fact that their GM just mortgaged the next 3-4 years for someone who …

A. Hadn’t won a single playoff series.
B. Was playing for his fourth team in eight years.
C. Monopolizes the ball.
D. Didn’t get along in New Jersey with one of the best players on the Knicks (Keith Van Horn), which meant there needed to be a second trade.
E. Only played unselfishly last season (when he was gunning for a contract extension).
F. Ditched a once-in-a-lifetime situation in Minnesota with KG.

Seems like a pretty big gamble just to sell some tickets and make the back page of the Post, right?

Again, New Yorkers didn’t care. Back in January, I remember discussing the deal with my Knicks fan friends, spelling out exactly what had happened, then listening to them respond with the same thing: I don’t care, I’m just happy they’re interesting again. It was like watching a buddy who hadn’t gotten lucky for a few months suddenly fall in love with a stripper.

They felt differerently after Isiah hired Lenny Wilkens — apparently Red Holzman was the second choice — then gave Van Horn away for Thomas and Mohammed, a classic “I’ll give you a quarter for two dimes” trade. This had evolved into a soft, rudderless team built around a shoot-first point guard, flanked by mediocre defenders and guys who couldn’t rebound or contend shots. I’m not even sure they run any plays. When Lenny holds up one finger, I think he’s signalling that he needs to pee.

Anyway, the inevitable losing streak followed, along with the questions about Isiah and Marbury, as well as the birth of a new face: The Isiah Thomas “If I Look Angry Enough When I’m Watching This Blowout Loss, Maybe People Will Forget That I Brought Most Of These Guys In” Face. Well, you did.

Hey, we know about Isiah, who burned bridges in Detroit and Toronto, bankrupted the CBA and failed miserably with a talented Indiana team. Pretty cut and dry. But what about Marbury? How do you explain last year’s remarkable season in Phoenix, when he reached his ceiling as a player and seemed poised to finish his career with the Suns? How could someone fall from “Franchise Player” to “Trading Block” in less than seven months? Could he ever regain the magic?

That’s why, with the obvious exception of KG, Marbury was the most interesting player in Round One. Nobody knew what to expect. As Pierce and the C’s proved last spring, the right player and the right crowd can be a pretty dangerous combination in Round One. You never know.

Stephon Marbury, Jason Kidd
What do you suppose Phoenix thinks of the Kidd-for-Marbury trade now?
Alas, the Nets looked better than ever. And the Knicks looked downright dreadful. Especially Marbury. He spent the first half of Game 2 launching jumpers, rarely driving to the basket or getting his teammates involved. In the second half, with the game slipping away, he started penetrating and setting up Kurt Thomas and Shandon Anderson — yikes — who predictably couldn’t hit anything. When he tried to take over the game again, it was too late. It was a kooky performance, one of those games that reminded people why he’s been traded multiple times. Even the TNT announcers were calling him out.

Back at MSG for Game 3, Marbury pulled the same schizo routine, displaying little of the toughness he showed in that Spurs series last spring. And yet the Knicks kept hanging around; you could sense the fans clamoring for Marbury to take over the game. Never happened. He missed two threes in the final minutes that would have brought the house down. And that was that. On Sunday, the Nets arrive at MSG with brooms.

Here’s the kicker: Thanks to Isiah, this same Knicks team will return intact next season. And the year after that. They don’t have any choice. Everyone makes big money. The only tradeable commodity on the team is Marbury, heading into his ninth year, and he isn’t going anywhere. So Knick fans will spend two more seasons being tantalized by a potential superstar, someone who should be one of the better players in the league, but he isn’t, and there really isn’t a definable reason why.

Did Isiah screw the Knicks for the foreseeable future? I think so. It’s a not-quite-a-playoff-team led by a not-quite-a-superstar, with no real way of turning things around in the next three years, and the wrong guy calling the shots to boot. Not exactly a recipe for success. Then again, you could say the same thing about the Celtics.

In fact, I think I just did.