Posted on December 1, 2008 by Jorge Costales

What do these people have in common?

They are all graduates of the great Miami Senior High [MHS – no it’s not transposed you infidel].

The most recent notable added to the list was the subject of a New York Times profile, Alberto Riveron–the NFL’s first Hispanic referee. The writer did not include a mention of MHS, which we will forgive this one time. Article referenced is copied in full at end of post.

Alberto was two years behind me at MHS, I don’t recall him but a couple of my friends do–the heads-up about the article was provided a fellow MHS 77 grad whom I cannot endanger by mentioning for fear of reprisal from FOOs [Friends of Obama]. There is a sense of pride when one of ‘us’ makes it out there. But the ‘us’ in the previous sentence is subject to degrees. A Hispanic, a Miamian, a Cuban-American etc., the pride is there but differs. When the us includes MHS, there is unadulterated pleasure. There is a release of endorphins consistently rivaled only by those who were able to witness the dailies from the movie Sirens. If you think your high school experience was better than anyone who has ever attended MHS, you are fooling yourself more than an Amy Winehouse drug counselor.

There is a line in the article that caught my attention, ‘Besides, he hardly feels like a minority in Miami.’ MHS’s demographics were overwhelmingly Cuban-American [>90%]. So while immigrants, we didn’t feel different or ostracized. In ways that I know we didn’t realize back then, being part of MHS also meant that we had a real connection to Miami’s history. Feeling that you belonged and that you belonged to something very American–as the history and the black and white pictures everywhere would attest–was a very valuable feeling to a 1st or 2nd generation immigrant. I was a Stingaree before I was a citizen, but it was a big part of why I wanted to be a citizen. It was a time and a place that I loved and had no desire to leave behind. People who are exiles psychologically don’t think of their new countries the way I thought of MHS and Miami. So goodbye Cuban exile, hello Cuban-American.

There is an irony buried in all this. While trying to fit in, we were actually the embodiment of the most uniquely American story, the immigrant. It all reminds me of GK Chesterton’s beautiful thoughts about rediscovering Christianity.

Like them I tried to be some ten minutes in advance of the truth. And I found that I was eighteen hundred years behind it. I did strain my voice with a painfully juvenile exaggeration in uttering my truths. And I was punished in the fittest and funniest way, for I have kept my truths: but I have discovered, not that they were not truths, but simply that they were not mine. When I fancied that I stood alone I was really in the ridiculous position of being backed up by all Christendom. It may be, Heaven forgive me, that I did try to be original; but I only succeeded in inventing all by myself an inferior copy of the existing traditions of civilized religion. I did try to found a heresy of my own; and when I had put the last touches to it, I discovered that it was orthodoxy. 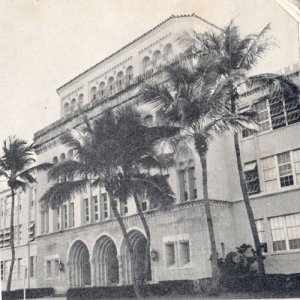 MIAMI — Alberto Riveron was 5 when his mother, Irene Valdes, brought him here from Cuba, hoping for a better future that she could not quite imagine. Her first job was in a shoe factory, inserting insoles that read “Made in Italy.” But she spent most of the years supporting her only child by ironing and pressing at a dress factory.

That is just another reason Valdes does not seem to mind when Riveron, now 48, drops by on Wednesday nights to unload one item of dirty laundry: the white knickers he wears as an N.F.L. referee.

“Nobody gets them as clean as she does,” Riveron said, sitting beside her on the couch in her condominium. “And she puts a perfect crease on them.”

Among the countless immigration journeys, the one that Riveron and his mother began in January 1966 is original. This 5-year-old Cuban boy grew up to be the first Hispanic referee in the N.F.L., the most American of sports leagues. He was promoted to one of the 17 top positions this year.

Valdes will occasionally turn on the television for a glimpse of him and the sound of his voice. She cannot bear to watch for long. When Riveron played football in the neighborhood streets near the Orange Bowl as a boy — not soccer, like so many others in the neighborhood — she took to calling it el juego de los empujones, the game of pushing.

“I’m afraid something will happen to him,” she said. “Someone will push him and hurt him.”

Still, the N.F.L.’s marketing arm has had difficulty winning over Hispanic fans, particularly in households where Spanish is predominantly spoken — like the one in which Riveron was raised. There are only two dozen Hispanic players in the league, and Riveron is the only Hispanic among its 120 officials.

“He’s got a responsibility ahead of him,” Mike Pereira, the league’s vice president for officiating, said of Riveron. “I’m going to work with him and others about recruiting more Hispanic officials. We’re constantly trying to diversify our staff. It’s the makeup of our country.”

Riveron, with thick arms and a few specks of gray in his dark hair, is married with two teenage sons. He sees his promotion less symbolically. He began officiating in youth games as a second job in 1977, when he attended a clinic for youth football officials. Besides, he hardly feels like a minority in Miami, a predominantly Hispanic city with a Cuban soul.

But his wife, Patricia, said he was privately proud of his distinction. It is telling that, while most friends call him Al, Riveron the referee wants to be known as Alberto.

“It is pretty neat, because of where I came from,” Riveron said over lunch at La Carreta, a bustling Cuban restaurant where men crowd an outside counter, engaged in lively discussions in Spanish while sipping from tiny cups of café Cubano.

Valdes and Riveron were among the roughly quarter of a million Cubans who arrived in the United States on freedom flights, sanctioned by the governments of both countries in the 1960s and early 1970s. Riveron’s father, also named Alberto, Valdes’s former husband, immigrated three years earlier. He now lives on the same block of well-kept ranch houses as his son, daughter-in-law and grandsons.

“I was afraid to get on the airplane, but I had to do it,” Valdes said. She called it, in retrospect, “a perfect decision.”

On Tuesday, she and her son traded stories of building lives together in a new country. They talked about hours spent sitting around the radio, and the excitement of getting a black-and-white television that barely worked. When Riveron was 10, he came home from school one day to find his mother had a surprise. He heard ringing. It was their first telephone.

“Now my kids both have cellphones,” Riveron said, another reminder of how times have changed for him.

He began officiating college games in 1990 and spent 15 seasons mostly in the Big East and Conference USA.

“He had the look and presence of a referee,” Pereira said.

The N.F.L. hired Riveron as a side judge in 2004. He worked under the referee Ed Hochuli for two seasons, then under Gerald Austin, whose retirement opened a spot for Riveron last spring.

N.F.L. officials are part-time employees, earning $2,500 to $8,400 a game, depending on their roles and years of service, Pereira said. As a referee and crew chief, Riveron works 35 to 40 hours each week in addition to his full-time job, selling hurricane shutters for Florida Storm Panels.

“If I’m meeting a Cuban customer, I’m going to wear a guayabera,” Riveron said, referring to the formal white linen shirt, usually with pockets and pleats, popular in tropical climates. “And I bring along Cuban pastries and a shot of coffee.”

He was not dressed that way last Tuesday.

“This morning, I was at a construction site,” he said. “I wear jeans, a polo shirt, tennis shoes. But I still bring the Cuban pastries.”

Riveron’s home office, the one room Patricia allowed him to decorate, is a giant scrapbook to his family and to officiating. One wall is crowded with family photographs. A bookcase holds footballs from various officiating milestones: first college game, first bowl game, first N.F.L. game.

Riveron often sits in a leather chair behind a large desk, remote control in hand, studying game films and calls on his television. In a typical week, he returns home late Sunday or early Monday with a DVD of the broadcast of the game he officiated. On Monday and Tuesday, he trades calls and e-mail messages with other crew members to discuss erroneous or missed calls.

He anxiously awaits the report from an officiating supervisor analyzing every aspect of the crew’s performance, which arrives about 6 p.m. on Tuesday in an e-mail message. The crew discusses it on a conference call, and Riveron responds to the supervisor in writing.

“Then we hold our breath,” Riveron said.

Final grades from the game are issued on Wednesday, part of a season-long assessment to determine which crews will work the playoffs. Riveron, who has officiated in the postseason three times as a side judge, is not eligible this season because he is a rookie referee.

The weekly routine for officials includes training tapes and an exam issued by the N.F.L. The travel prevents him from spending any weekends with the family. This weekend, Riveron and his crew will meet in San Francisco, where the 49ers play the St. Louis Rams.

Riveron spends spare hours, usually late at night, watching himself on a DVD, often falling asleep in his chair. He studies his positioning on the field and rehearses his announcements.

“We’re the only sport where the game stops for an official to talk to you,” Riveron said. “You turn on your microphone and tell 50 million people what you decided, and why.”

Recently, for the first time, a stranger recognized him as an N.F.L. referee, he said.

On the wall behind the desk chair is a map of Cuba — Riveron and his mother have never returned. There is Cuban currency, framed, and other personal mementos of a country Riveron says he does not really remember.

Before a preseason game this summer, the broadcaster Al Michaels asked Riveron what he preferred to be called on the air.