Posted on November 9, 2008 by Jorge Costales 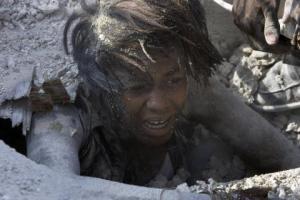 On Friday a school collapsed while in session. The killed and injured children were in the hundreds. When you consider all their problems, what is happening in Haiti seems beyond cruel.

But not beyond our ability to help. Catholic Relief Services is one way and donations made there can be targeted to help Haiti specifically. All Haitians, in addition to our many Catholic brothers and sisters there, warrant our prayers and financial help.

All articles referenced are copied in full at end of post.

BY JACQUELINE CHARLES
With blood dripping from his tiny forehead, 2-year-old Jerry Corilan screamed and wiggled his feet as a rescue worker whisked him from the rubble of the crumbled school building to a nearby triage center.

Jerry calmed down only after he realized he was in his grandmother’s arms. She, like scores of others, kept vigil throughout the night as United Nations and Haitian rescue workers sifted through crushed concrete with their bare hands, searching for survivors.

Carelle Romulus said Jerry was the last of her four grandchildren to be rescued from College La Promesse Evangelique in this Port-au-Prince suburb.

”I am grateful to God, he saved all four of them, even though some are injured,” she said.

Jerry was pulled from the crumbled building about 1 p.m. Saturday, more than 24 hours after the third floor caved in, killing at least 84 people and injuring more than 150.

It was unclear how many students were inside. Some estimates have put the number at 700, causing officials to fear that the toll could increase further.

Jerry was one of at least two students to be rescued Saturday. At 2 a.m., an 8-year-old girl was freed, officials said.

Also Saturday, U.S. search-and-rescue experts took the lead in the delicate task of removing massive pieces of concrete from the school.

Firefighters from Fairfax County (Va.) Fire and Rescue Department’s urban search and rescue joined local emergency workers and others from Martinique just as Jerry was rescued.

Fortin Augustin, the preacher who owns and built the school,was arrested late Saturday and charged with involuntary manslaughter. He was held at a police station in Port-au-Prince, said police spokesman Garry Desrosier. The poorly constructed building was bordered by two ravines, which hampered rescue efforts. The absence of a building plan also posed challenges for those trying to figure out just where classrooms or beams may have been located within the mazelike stairwells.

All made it difficult for rescuers to pinpoint precisely where a faint moaning — heard Saturday afternoon — was coming from when they called out, “Is there anyone here?”

While Jerry’s rescue did bring some good news, the day was marked with frustration, endless waiting and calls by some government officials for more oversight of Haiti’s schools, both private and public.

”There is no concrete on that building, just water and rocks,” said Steven Benoit, a member of Haiti’s lower house of parliament while visiting the scene. “There are building codes, but the people are not respecting them.”

Benoit said the country’s education minister, Joel Desrosiers Jean-Pierre, was expected to appear before parliament on Wednesday to answer questions about how the tragedy happened. Jean-Pierre, who only recently became education minister, said a government commission was in the works and would include educators and elected officials who will be looking at the issue of where children are attending schools.

But the focus for now, he said, ”is on saving lives.” The effort included not just Haitians, but emergency workers from several United Nations countries involved in the Stabilization Mission here, as well as Martinique and the U.S. Southern Command.

Throughout the day, Haitian volunteers formed a human chain to move water and juice into the Red Cross triage as others toted plywood and other rescue equipment down the steep hill. As they worked, thousands of onlookers surveyed the scene from a dusty street leading into the shantytown and from nearby hills.

Fairfax firefighters used metal cables to secure and shore up the building as concerns grew that what was left of the third floor with its cathedral columns could fall onto workers. They used fiber-optic scopes as well as dogs to search for survivors. The Martinique brigade also had two dogs, including a pit bill.

”Every time I find one, I have to thank God,” Michaèle Gedeon, president of the Haitian Red Cross, said as one of volunteers ran past carrying Jerry amid applause.

”The biggest difficulty is the state of the building. It’s a building that presents a lot of problems because of the way it is constructed. . . . Every time they get ready to intervene, there is a problem,” said Minister of Youth and Sport Evans Lescouflair, designated by Haitian President René Préval to coordinate the operation.

Lescouflair said authorities still cannot confirm how many children and teachers may have been inside when the building crumbled.

There was a party at the school on Friday, and in addition to students there were vendors as well as a DJ who was reportedly trapped with two students. The estimated number of students has ranged from 300 to 700.

Minister for Public Safety Eucher-Luc Joseph said the building had been poorly constructed and was structurally flawed.

He later blamed the tragedy on “the way we are living in this country.”

Préval, who visited the site twice Saturday, told The Miami Herald that emergency workers discovered ”a class with 21 students and their teacher inside.” The students were in their final year of high school.

The mayor of Petionville has told local Haitian radio that during her previous term as mayor she had stopped construction on the school, but it resumed sometime between 2004 and 2006 when an interim government was put in place.

Préval said tragedies such as this speak to the need for political stability.

”Every time there is instability a bidonville [shantytown] gets constructed. When there is no political stability, politicians come and they don’t have the force to make laws,” he told The Miami Herald shortly after visiting the site. “

”A government has to have the courage to take decisions that are difficult,” he said. “The laws are there but people don’t respect them.”